For the first time, Greensborough Netball Club had all 6 teams playing on the one night. For round 7 there were many close games and 2 very nice wins.

Team#1 came out determined to get back into the winner’s circle. There were plenty of intercepts and high quality possessions to keep Montmorency A under control for an excellent 8 goal win. Go Boro!!!

In the first of the close games, it took just a handful of turnovers in the 2nd quarter for Team#2 to slip behind Watsonia A by 6 goals by half time. Team#2 rallied early in the third quarter to get back within a few goals but couldn’t keep it going to lose by 6 goals. 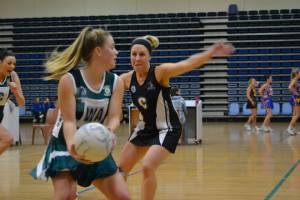 After a very promising first quarter and just 3 goals down, Team#3 then struggled against highly rated Bundoora Comets B in the next two quarters to trail by 15 goals. Team#3 worked hard to get back into the game in the last quarter to eventually lose by 18 goals.

Team#4 had a big win over Montmorency C. After a low scoring first quarter, Team#4 turned it on with tremendous anticipation and hard running court work to win by 19 goals. Go Boro!!!

Team#5 played Thomastown B, had the lead and controlled the game for well over 3 quarters but many turnovers in attack in final quarter were costly with hardly any goals scored. Team#5 drifted to a 4 goal loss.

Team#6 in just their 2nd game played against much more experienced Whittlesea C who have already played 6 games in other Sections, Team#6 had plenty of new faces to work with and the resulting unfamiliarity saw Whittlesea blow the lead out to 8 goals by 3 quarter time. But then in an amazing turn around, Team#6 took up the challenge and looked like stealing the win, but just fell short to lose by one goal. Great efforts by all players in all teams.