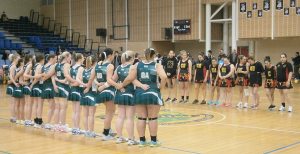 Family, friends and supporters of Boro provided a huge turn out for the big end of season event. After the National Anthem, both team line-ups were introduced to the crowd and then it was down to business.

Team#5 came flying out of the blocks to grab the first 3 goals of the game with ease, but then play became untidy with many passes going astray which let Fitzroy Stars C snatch a 1-goal lead by quarter time. Fitzroy held this momentum through the second quarter with their GA mixing it up and causing a few headaches. Team#5 wasn’t getting the ball past the centre often enough and fell behind by a handful of goals at the major break.

At halftime, Head Coach Renee let loose with an inspirational and passionate address to the players… the team could play much better, a concerted effort was needed, it was now or never!

Team#5 tackled the third quarter with greater intensity and determination. The effect of Renee’s rev-up was instant with an amazing run of 7 straight unanswered goals. Team#5 had the ball on a string and was able to get within a goal of Fitzroy.

Then the last quarter turned into a titanic struggle with both teams throwing all they could into it. The difference came down to a 3-goal burst by Fitzroy after Team#5 grabbed an early goal. It was essentially goal for goal from that moment until the final siren with Team#5 unable to bridge the gap and losing by just 4 goals, 28-24.

A tremendous game with a close finish.

Players of Team#5 represented Boro with the highest esteem in the Grand Final and for the whole season. Premiers next year! Well done girls, everyone is incredibly proud of you all.