Boro game times for this Friday night, all games at RMIT:

Only five games to go till NNL season 2015 finals.

Last Wednesday, the Greensborough Netball Club held a Health and Well-being night in place of our usual netball training session.

All Boro players and coaches were asked to make a $5 donation to the National Breast Cancer Foundation (NBCF) upon entry and raffle tickets were sold to raise additional funds.  All funds that were raised have been donated directly to the NBCF, with the current total at $236 (correct as of 08/07/2015).

If you would like to donate, please do so via NBCF Go Fundraise GNC.

The night commenced with a talk on sports nutrition by Boro’s own Team One Captain, Bianca who has recently completed her nutrition studies.  Bianca spoke about the importance of fueling your body prior & post games/training, and the right combinations of fuel and hydration.

Ebony Korkie, Boro’s Myotherapist from Untangled Living located at Rivers of Yarrambat, took each team through a session of using foam rollers and the general importance of looking after your body pre & post netball.

The event was fantastic and Boro would like to thank our sponsors for the night, who graciously donated prizes for the raffle:

We are well into the NNL season and Boro played four games last Friday night and won all four. The ladders:

This coming Friday night is the inter-league game v Southern Football Netball League at Parade College from 7pm. Boro has one coach and five representative players (out of a squad of 20). 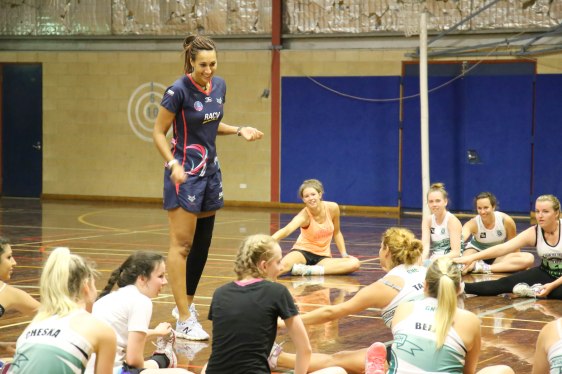 The Greensborough Netball Club had the pleasure of hosting Melbourne Vixen Geva Mentor at a special training session for our 2015 players last week.

Standing at 188cm, Geva is the starting Goal Keeper for the 2014 ANZ Championship premiership winning Vixens and also plays in the England national team. Geva’s impressive list of netball achievements include:

After the success of GNC winning the Northern Netball Leagues Section Two Premiership last season, the key focus of this special training session was defence as we continue to work through our preseason training themes.

Assistant Coach Natalie Jolley says, “Geva was amazing and all defenders should take note from what they learnt. It’s clear that she’s a natural coach and she took time out to speak with almost every one of our 40 players and provide valuable one on one feedback.”

GNC’s four teams were divided into two squads, with each squad being coached by Geva for 40 minutes in a number of footwork, defence and timing drills.

GNC President Jacqui Martin says, “Geva was an absolute pleasure to have at training and it was an invaluable experience for our club to have someone of such a high international standard to teach our netballers who range in age from 15 right through to late 30’s. She was lovely, encouraging and you can easily see why she is one of the World’s favourite netballers.”

Anyone interested in hosting a Melbourne Vixen netballer at a club training session should contact Stacey O’Neill, Programs Development Manager at Netball Victoria by phone: 03 9321 2271 or email stacey.oneill@netballvic.com.au.

GNC would like to thank Geva Mentor, Netball Victoria and the Melbourne Vixens for this wonderful opportunity.

The NNL regular home and away season finished off last Friday night with Boro retaining their second spot on the ladder after a 36-19 win over West Ivanhoe.  The top four ladder finished:

The semi finals kick off this Friday night at Parade College at 7pm.

Come along and support the girls!

What’s coming up for GNC in February?

Any questions? Email us at info@greensboroughnc.com.au

See you all soon!

The 2015 NNL campaign for Greensborough Netball Club officially kicks off next Wednesday night, 4th February with our trials for new players as well as compulsory training for our returning 2014 players.

Please be ready to hit the court at 8pm sharp at St Helena Secondary College, Wallowa Road, Eltham North. Details about 2015 playing and training venues can be viewed here.

All players MUST have completed their online 2015 registration form before taking the court.

Any questions? Email us at info@greensboroughnc.com.au

See you all soon!

Optional pre-season training continues for the month of January and we have two sessions left:

What to bring? Water and towel.

What to expect? For the first session back, a relaxed 60-90 minute outdoors fitness, circuit and ball work. Run by the players for the players.

GNC are currently seeking applications for additional coaching staff, sponsors and players for the 2015 season.

All GNC coaches must have their Foundation Coaching accreditation obtained prior to 30th June 2015. If interested please email your application letter, coaching CV and relevant coaching certificates to info@greensboroughnc.com.au

All players must be available on Wednesday nights from February to September for weekly compulsory training sessions and be available on Friday nights from late March to September for weekly matches.  If you are interested, can commit and are over 15 years of age, please fill in and submit our online registration form. New players will need to attend selection trials in early 2015. 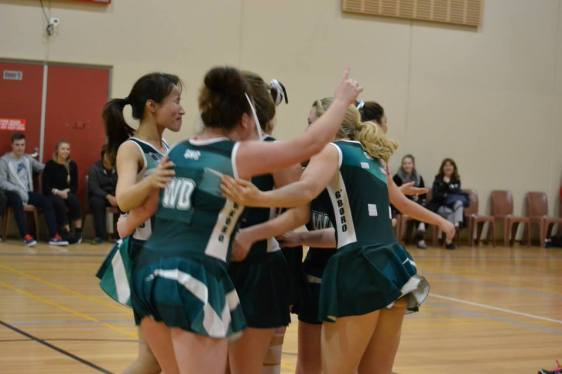 The 18 round, 2014 NNL season comes to a close this Friday Night at Parade College.  The players and our coaching staff have worked tirelessly since early February and can now be congratulated with two Grand Final appearances.  Game times are:

Let’s get the Boro Army down to the support the girls in what will be two very entertaining netball games.